Enter your Zip Code to find your nearest dealer:

Why are my Shower Head Nozzles Clogged? 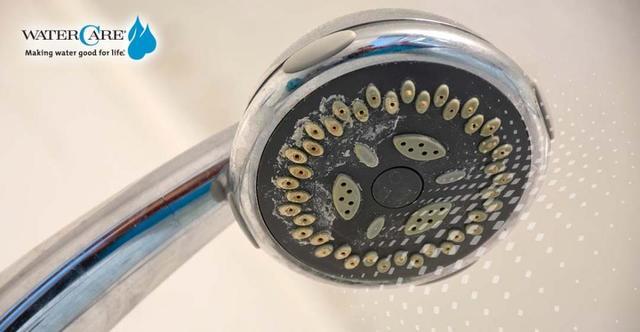 Taking a shower is one of the simplest pleasures in life. The feeling of warm water has an almost magical effect on people. If you enjoy the calming, revitalizing, and cleaning effects of a good shower, you know how important a good shower head is. A cheap, standard shower head is okay, but a simple upgrade to a bigger shower head or one with multiple settings can make your daily cleanse a luxurious experience. Investing in a new shower head is an investment in your comfort, but even the finest shower head will clog up with limescale after a while if you have hard water. Instead of replacing it or trying to clean the chalky residue off the nozzles, why not fix the problem at its source?

In most parts of the United States, it doesn’t take long for a brand new shower head to get clogged up with limescale. It isn’t noticeable for a long time, but once it starts, it is hard to fix or prevent. Limescale is made up of calcium deposits that slowly grow in your shower head nozzles. If there is too much calcium in your water, these deposits will continue to appear until a change occurs in your water.

Why is there Calcium in my Water?

Calcium is a common element found in nature. Even if truly pure water is made of only hydrogen and oxygen, water has a tendency to grab whatever it touches and take a little bit as it passes, also known as erosion. Calcium is found in limestone, and limestone is everywhere in the United States. Since most homes get their water from groundwater, most water contains calcium particles and other elements like magnesium. When you find enough calcium and magnesium in water, it is known as “hard water.”

If you live in a city, your municipality is responsible for filtering and treating your water to make sure it is safe before they distribute it to your home. Hard water does not cause any known health effects though, so most city water treatment plants do not do anything to reduce the amount of calcium in your water.

Why Does Calcium Clog Shower Heads?

If you have hard water, it’s coming out of every faucet and shower head in your home. It is easy to notice in showerheads because the nozzles are smaller, and a tiny bit of buildup makes a bigger difference. As calcium gathers, it might totally block a nozzle or make the water coming out point in a different direction. The mineral likes to stick to the insides of pipes, nozzles of showerheads, faucet openings, shower doors, and other places because it gets left behind as the water that once settled on it evaporates. Calcium is heavy, so it lingers, making an ideal surface for more calcium to stick to in the future. Even shower heads with rubberized nozzles aren’t immune to scale buildup from hard water.

There are some household tricks you can do to remove this hard water scale build-up, like soak your shower head in a bowl full of vinegar until the minerals break free. Commercial cleaners are also available from most stores (like “CLR” for example) that are also made to break down hard water residue. Unfortunately, these cleaning techniques require harsh acids to dissolve the calcium build up which can also do damage to the finish of your shower heads over time.

How Do I Get Rid of Hard Water?

The only way to get rid of hard water is with a water softener. The calcium and magnesium minerals that make water hard have an electric charge that make them difficult to remove through a regular water filter. The process by which a water softener removes hardness minerals is called “ion exchange.”

Hundreds of thousands of tiny resin beads called “media” inside a water softener tank are loaded up with sodium molecules from the salt held in the system’s brine tank. As hard water passes through your water softener, the charged calcium and magnesium are drawn to the resin beads like a magnet, exchanging themselves with the sodium that was there. Once the unit has captured all the hardness it can hold, it goes into regeneration to “recharge” the resin beads with sodium and sends the unwanted calcium down the drain. Water softeners can be recharged to continually pull hardness minerals out of the water that flows through it, provided they are always supplied with salt in the brine tank. Soft water flows out of the water softener and into the plumbing of your home, protecting all of your fixtures and appliances from scale build-up.

Why Do Water Softeners Need Salt?

Water softeners require salt the same way your phone needs a charger. Just like how your phone runs out of power over time, your water softener will gradually run out of space to hold more calcium and magnesium. These molecules are stored in little dimples on the surface of the resin media, so there is only so much they can hold. Sodium is key to freeing up more space to collect calcium on these beads and it comes from the salt (made up of sodium chloride) added to your brine tank. When the media is full, the water softener flushes the tank with salty water, which removes the calcium and magnesium so it can be flushed down the drain, making it ready for more calcium and magnesium. This process is called “regeneration,” and, like charging your phone, it is usually done at night when you’re asleep. Maintenance is simple; make sure the brine tank is always supplied with solar salt crystals and a water softener should continue working for years.

How Do I Get a Water Softener in my Home?

Do-it-yourself-ers may want to take on the challenge of installing a water softener on their own, but this is a job best left to the professionals. Contact your local WaterCare dealer first, and learn about the benefits of a water softener with no commitment. When you call, you can schedule a free water test, which is conducted by your local WaterCare authorized water treatment expert. This test will find out how hard your water is and how much water your family needs on a daily basis so your WaterCare water treatment expert can identify the best water softener for you and your water’s needs.

Not only that, but you can also get a free estimate on a water softener installation with your water test. It all begins by giving your local WaterCare authorized dealer a call or email. Contact them today to learn more about water softening so you can have soft water in your home. Clogged showerhead nozzles will soon be a thing of the past!

Every system in our complete WaterCare® line of water treatment systems has been designed to provide better water for your home. The innovative products combine efficiency and flexibility to best satisfy your family’s needs.

WaterCare® is a name you can trust when it comes to providing the quality water you and your loved ones deserve.